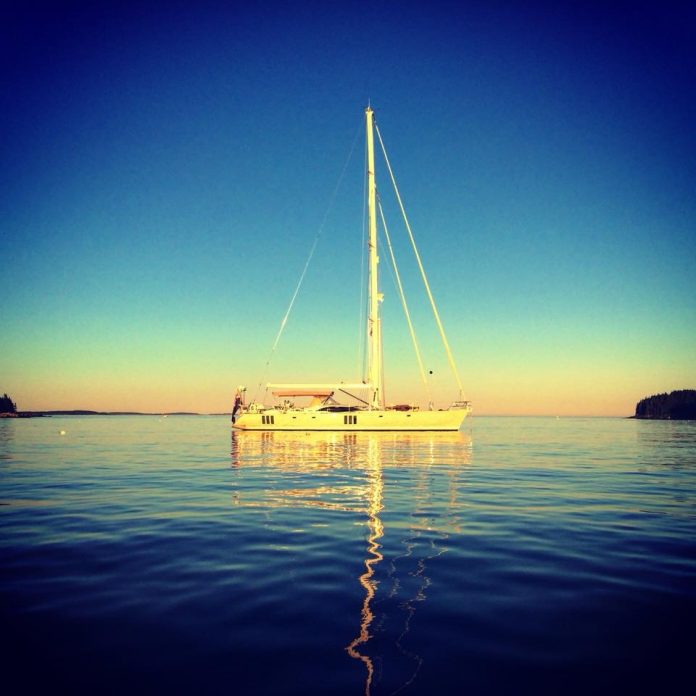 Day six sees us still in moderate Tradewind conditions, and bang on
course for the islands. The beauty of the South Pacific Trades is that
they give a really nice broad reaching angle, meaning fast and stable
conditions. The boat stays powered up and there is no rolling. Ideal
for a boat like Ipixuna which isn’t set up for dead running. Her
enormous spinnaker pole was removed years ago. So yesterday was our
best run so far (and my best ever) a 24 hour run of 265 nm! That’s an
average of 11 knots.  Top speed held by Chloe who clocked up 19 knots
boat speed at the end of an epic surf…

However progress was halted after a discovery on my morning deck
checks. Daily gear checks are critical on an ocean passage, I try to
go aloft whenever conditions allow but there’s plenty to inspect at
deck level too. There are often a few things lying on the deck after a
night thundering along in the trades. Flying fish and squid are
common, but half a sheared stainless bolt is slightly more worrying.

It didn’t take long to track down the culprit. Our newly repaired boom
vang fitting (connects the hydraulic vang to the boom) had failed.
Closer inspection showed the entire stainless steel fitting shifting
with the boat’s movement and two of the bolts finger loose. This was
completely rebuilt in Antigua, how could this happen after only three
months? We had to get the main down and the boom secure before the
heavy hydraulic ram parted company with the boom, which was imminent.
Everyone up to haul down the mainsail in windy conditions.

Main stowed, boom secure, Phew! Right, what next? We decided to remove
the vang from the boom and see how bad it was. Once the vang was
removed we started backing out the bolts that attached the fitting to
the boom. Four out of six were broken and the two surviving ones were
mangled. Impossible to repair at sea without the correct bolts
onboard. After a bit of head scratching, the obvious solution: Why
can’t we sail without the vang? So a topping lift on the boom and a
downhaul rigged up to keep the boom level and we were ready to re
hoist the mainsail. Four hours later and we’re back up to full speed.
Just a large hydraulic ram lashed to the coachroof…

Learning those all important knots for use onboard – Part 2....

Preparing and Raising the Mainsail

Our beginner sail training courses offer an ideal introduction to the world of sailing.

Build on your sailing experience towards becoming a fully competent skipper.

Our advanved sailing courses will stretch your seamanship skills to the highest level.

ABOUT US
Learn2Sail has courses for those seeking competent crew basic sailing or Day Skipper courses, right through to gaining the Yachtmaster professional qualification. All Learn2Sail courses have RYA sailing accreditation and certification.
Contact us: info@learn2sail.com
FOLLOW US
© Learn2Sail 2019. Website by Fizzy Apple Ltd